In 2000 the “КARO” area, located around the Printing House building on Tsarigradsko Shose Blvd., has attracted our attention as a potential future destination for development. We have been looking for the right place for our client to build for publishing activities. After many negotiations, documentary turmoil and meeting the restitution process, we satisfied his investment intentions and realized one of the first deals in the area – at that moment still a bare field. The price was only $ 25 / sq.m.

Years later, as though we had good luck after us, the area became one of the fastest growing business districts in the capital.

In 2015 the same plot, which in 2000 was planned to be build a publishing house, was looking for a new owner. And the mission to find one fell upon us again. Today we are proud, that we were the reason and in the beginning of ZORA Eye Clinic, to be built on this land.

Ten years earlier, in the period 2004-2007, we had become one of the initiators of the change in another zone – the one of Mall Paradise. With common efforts and a well organized and united team, we have realized the deal with the land of the Mall. Again a bare field in an industrial area. In 2020 we can say that 15 years ago we became part of the great impetus for the development of the region, namely – the realization of one of the largest deals in the capital with a big international investor. Today it is undoubtedly an attractive place for business and for living. The development of the metro network in this direction, thanks to the common policies of the business and the Metropolitan municipality, also provided a huge precondition for this.

In 1998, in some difficult times, when we did not know where and how the city was going to be developed, we initiated another new beginning – the development of the shopping area of Simeonovsko Shose Blvd.

Today we return to the “KARO” area to share the good energy we leave behind and take on a new mission and challenge to the development of the residential area around SOFIA TECH Park.

We believe that when we work with our heart and receive the support of reasonable investors and the good policies of Sofia Municipality, together we can create a good start and a well-planned and happy future.

Proven international specialist with over 25 years. professional experience in the transactions, management, consulting and project management in the field of real estate, with many professional qualifications and acquired designations. Member of several local and international organizations. 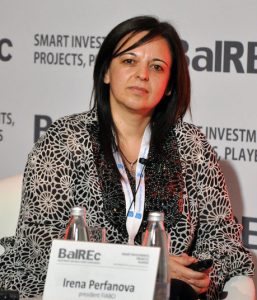 IRENA PERFANOVA is a current Vice President and Immediate Past President of the Managing Board of the National Real Estate Association in Bulgaria / NREA /, a member of the Board of Directors of the European Association of Real Estate Professionals / CEPI / and a Deputy Chairman and Immediate Past Chairman of the of the Branch Organizations Council at Bulgarian Chamber of Commerce and Industry / BCCI /. She has more than twelve years of experience in managing non-governmental organizations in the field of real estate, which, in addition to creating professional standards, are also working together to create better policies and living conditions in settlements. Currently she continues with these activities, and over the years she has held positions as President, Chairman, Deputy Chairman, President and Vice President of Committees, Member of International and National Boards at the National Real Estate Association, the International Real Estate Federation FIABCI and the European Association of Real Estate Professionals CEPI. She has been honored for her active work and contribution to the development of organizations internationally. IRENA is a member of the Real Estate Market Advisory Group of the United Nations Economic Council for Europe and of the MRDPW / Ministry of Regional Development and Public Works/ Working Groups. A participant in discussion forums in numerous local and international events and conferences.